Their Final Act blurb; Jimmy McGuire, a washed-up comic, is found dead on the streets of Inverness, his body garroted. Back in the 1990s, McGuire had been half of a promising double-act until his partner, Jack Dingwall, was convicted of rape.
Soon after, a second corpse is found in an abandoned industrial site on the edge of the Moray Firth. The body has been there for some days and has also been garroted. The victim turns out to be a former musician turned record producer, who had also been the subject of rape allegations.
Meanwhile, DI Alec McKay and DCI Helena Grant are still wrestling with the fallout from one of their recent cases following an acquittal.
As the body count rises, the police think they have the killer in their sights. But McKay is concerned that the evidence is too neat so when he realises there will be a final victim, he fears that time is running out… 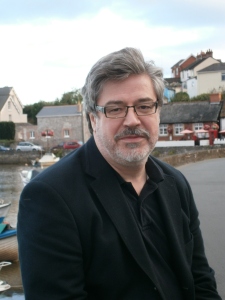 Author Bio: Alex Walters is the author of Candles and Roses, Death Parts Us and Their Final Act, all featuring DI Alec McKay and set in and around the Black Isle in the Scottish Highlands. He has also written four books set in and around Manchester – Trust No-One and Nowhere to Hide featuring the undercover officer, Marie Donovan, and Late Checkout and Dark Corners, featuring DCI Kenny Murrain – and three crime novels set in modern-day Mongolia, The Shadow Walker, The Adversary and The Outcast. Alex has previously worked in the oil industry, broadcasting and banking and as a consultant working mainly in the criminal justice sector. He now runs the Solus Or Writing Retreat in the Black Isle with his wife, occasional sons and too many cats.

WRITING ON THE BLACK ISLE;

I’ve been a frequent visitor to the Scottish Highlands since I was a small child. For some reason my parents, despite living in Nottinghamshire, decided that this was the obvious place to take holidays, so I have fond memories of touring the far north and the Islands, staying in small hotels and B&Bs. The scenery was breathtaking, but, as a small child, what stayed with me were the endless empty beaches – a far cry from our occasional day trips to Skegness or Mablethorpe. And in those days, of course, it was always sunny.

The one place we didn’t visit, as far as I recall, was the Black Isle. For those who are unaware, the Black Isle isn’t an island (or noticeably black, though that’s another story) but the peninsular created by the Moray and Cromarty Firths. In the 1960s, the Black Isle was much more isolated than it is today. The A9, the main route north of Perth, was nothing like the road it is now – and, to be honest, it’s still not much of a road – and when it was extended north of Inverness, it originally bypassed the Black Isle completely. It was only with the opening of the Kessock and Cromarty Bridges in the early 1980s that the Black Isle became more easily accessible.

We first visited the area a little over ten years ago. I can’t even recall now why we decided to come here for a holiday rather than elsewhere in the Highlands – possibly just because there was a suitable rental house available. We were staying in Rosemarkie, a beautiful little village with a wonderful beach, cliffside walks and, if you look long and hard enough, the occasional dolphin (with more available at Chanonry Point at the other end of the beach). We fell in love with the place almost immediately, and we returned time and time again, gradually deciding that this was where we wanted to live.

In the meantime, I decided to take a break from the Manchester-set crime series I’d been writing and have a try at setting a book in the Black Isle itself. I’d already had in mind the character of a mouthy Dundonian detective working among the heathen Highlanders, and it had occurred to me that some of the Black Isle locations, alongside the urban environment of Inverness, would provide a terrific backdrop for a crime novel. And so DI Alec McKay and the first book, Candles and Roses, were born.

Meanwhile, my children were growing up and the departure of the youngest to university provided us with the opportunity finally to move north (especially as the son in question had decided to go to university in Aberdeen). It took us longer than planned, as these things always do, with a few stumbles along the way. But last autumn we finally moved into our new home overlooking the Cromarty Firth, with stunning views of the firth and the peak of Ben Wyvis beyond.

The second book in the series, Death Parts Us, had appeared just before our move (although it features a climactic scene just along the road from the house we eventually bought). But the third, Their Final Act, was written in the room I now use for writing, which looks out on to that very same view. For the first time, I was able to write the book while actually sitting in the middle of the environment I was describing.

Has that made a difference? I’m honestly not sure. I thought that I knew the area pretty well after all these years. But there’s no doubt that as a permanent resident your perspective changes. We’ve been living here nearly a year now, and for the first time we’ve seen the full cycle of the seasons. We’ve seen the farmer in the adjacent field ploughing, sowing and harvesting his crops. We’ve seen the days squeezed to their shortest and thick snow on the mountains. And we’ve seen the midsummer days when it barely gets dark. We’d been here out of the tourist season previously, but we’ve never previously experienced the transition from summer to winter and back, the speed with which the days shorten and lengthen. Above all, we’ve been able to explore the area in ways that are simply impossible if you’re only here for relatively short periods, however frequently you might visit. Which means, apart from anything else, that I’m already amassing plenty of material for future books.