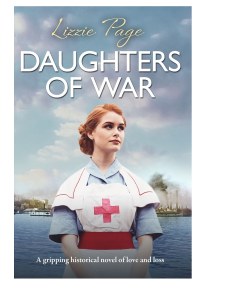 Blurb; An emotional tale of wartime love and sacrifice, inspired by an incredible true story…

As a teenager in Chicago, May always dreamed of travelling the world. So when she meets handsome George Turner, she jumps at the chance to return to London as his wife. Ten years later, May is wondering if she’s made a terrible mistake.

It’s 1914 and war has been declared in Europe. All around, brave young men are being called up to serve. George, banned from conscription himself, has taken to the bottle, and May suspects he’s seeing other women too. She longs for a way to escape.

The chance comes when May meets veteran nurse Elsie, who persuades May to join the war effort. May knows nothing of nursing – it will be difficult, dangerous work, but her heart is telling her it’s the right thing to do.

But then George does the unthinkable and May’s future is put at risk. Will she have to make the impossible choice between duty to her family and her promise to the soldiers on the front line? And can she live with the consequences if her husband goes through with what he’s threatening to do?

My Review; Daughters of War is book two in the War Nurse series but reads perfectly well as a standalone.

Got to give it to her May is a very determined and brave character. For what she did I admire her and she is an inspiration. A truelly emotional story that will stick in your heart. I was behind May the whole way. The characters were all mostly likeable that excludes George GRR. Setting is perfectly introduced. There are many happy scenes in the story but there are many sad scenes too. Taking the reader into the war through Mays eyes.

I loved this story… I was immersed throughout. Beautifully written. I awarded a well deserved four stars. Highly recommend. I cannot wait to take a step book and read book one! A new author YAY!