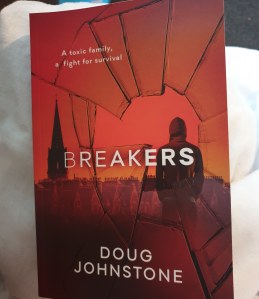 Blurb; Seventeen-year-old Tyler lives in one of Edinburgh’s most deprived areas. Coerced into robbing rich people’s homes by his bullying older siblings, he’s also trying to care for his little sister and his drug-addict mum. On a job, his brother Barry stabs a homeowner and leaves her for dead, but that’s just the beginning of their nightmare, because the woman is the wife of Edinburgh’s biggest crime lord, Deke Holt. With the police and the Holts closing in, and his shattered family in devastating danger, Tyler meets posh girl Flick in another stranger’s house, and he thinks she may just be his salvation . . . unless he drags her down, too.

My Review; Oh My Heart! Where do I start? I easily devoured this within a day! Such a brilliant story and I will explain why…

TYLER! Oh my. He’s trying his bloody hardest and is the best big brother ever to little bean. My heart. Those two have such a cute, special bond. I felt Tyler was trying to protect everyone around him and make everyone happy which sometimes isn’t possible. He’s a good lad really bringing his sister up.

BEAN! The youngest of the family, the cutest, innocent and doesn’t have a clue about the world she is in really. What she does know is that she loves her brother Tyler more than anyone. We all need someone to lean on. Such a sweet little girl.

Now don’t get me started on Barry and Kelly, especially Barry. While reading this book I found my anger building up and hating Barrys character to the point well, he got what he deserved. Such a horrible character. Grr. Kelly wasn’t much better either but I reckon there was another side to her underneath.

Brilliantly written, thrilling, fast paced and a page turner of a read which I actually didn’t put down for once well, until the end. A happy outcome for all. I actually got so emotionally attached to some of these character specifically Bean and Tyler, theyre both still kids. I awarded a well deserved four stars and would highly recommend.