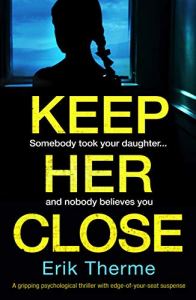 Then: Three-year-old Ally was found alone in a parking lot. She was barefoot and dressed only in a yellow sundress. In the middle of winter. What kind of person would abandon their daughter?
Now: Fifteen years later and Ally has a new family. But her real father has sent her a letter.
And now Ally is missing.
A gripping twist-filled thriller that will have you looking over your shoulder. Perfect for fans of Gone Girl, The Girl on the Train and Teresa Driscoll.

Author Bio: Erik Therme has thrashed in garage bands, inadvertently harbored runaways, and met Darth Vader. When he’s not at his computer, he can be found cheering on his youngest daughter’s volleyball team, or watching horror movies with his oldest. He currently resides in Iowa City, Iowa—one of only twenty-eight places in the world that UNESCO has certified as a City of Literature. Join Erik’s mailing list to be notified of new releases and author giveaways: http://eepurl.com/cD1F8L

My Review; Oh my goodness. What a belter of a story. If that prologue doesn’t draw the reader in I don’t know what will. This has to be one of the best prologues I must have read.

This story is a get set, go book. It’s a chase against time to find Ally. Both parent are concerned of her whereabouts and with no way of contacting her they have to discover whats really going on for themselves.

Dad is the typical dad, protective over his little girl. He goes into detective mode. Figuring out whose lying, whose telling the truth and who is helping. With a dark past himself he will stop at nothing until he finds his daughter. I understood where Ally was coming from and why she wanted to do what she did, but sometimes its better to just leave the past in the past.

A fast paced thriller, mystery and suspense filled story. I actually devoured this in an evening and stayed up late especially to finish it. Brilliant. I loved every minute of it. A well deserved five stars from me. Highly recommend! Plenty of twists and unexpected turns for the reader to endure in this one. A real page turner. Will Ally be found?