Her. Me. Handcuffs. You think you know what we’re up to, don’t you?
I’m Archer.

I’ve been in trouble plenty but I got these bad boys from home.
Emily looks so good handcuffed to me.
This is the only way I could think to stop her.
She found out her mom was in danger and she ran away.
She wants to save her, but we’re at war.
Her brother, my best friend, told me I have to keep her safe.
He trusts me.
Unlike every woman I’ve ever met.
Maybe it’s because I don’t kiss. On the mouth anyway.
But Emily’s the only woman who’s ever stood up to me.
Her thighs keep grazing mine. Her long brown hair tickling my bicep.
Locking her to me and throwing away the key.
I didn’t think this through…

This really revs my engine.

A steamy and unputdownable biker romance, Her Hot Ride will leave you swooning. Guaranteed HEA. No cliffhangers. It can be read as a standalone or as the third book in the Red Dragon biker romance series. 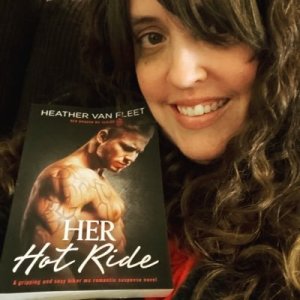 Author Bio;
Heather Van Fleet is a stay-at-home-mom turned book boyfriend connoisseur. She’s married to her high school sweetheart, a mom to three girls, and in her spare time you can find her with her head buried in her Kindle, guzzling down copious amounts of coffee.

Heather graduated from Black Hawk College in 2003 and currently writes Adult contemporary romance. She is published through Sourcebooks Casablanca with her Reckless Hearts series and Bookouture with her Red Dragon series.

*Chapter one has been split into 3 parts.

Between The Pages Book Club – Extract 1

Baker’s Not So Secret Blog – Extract 2

Whiskey, women, and wild nights. There was a reason the letter W was one of my favorites in the alphabet. Plus, the woman behind me in my bed currently tracing a nail up my spine was named Willa.

At least I thought she was.

“You can’t give me ten more minutes?” she purred.

“Sorry, sweets.” I glanced at her over my shoulder, stood, then winked. “Got places to be.”

“How about five minutes?”

I bent over and grabbed my jeans, knowing that even one more minute was impossible. Once the sun hit my face in the morning, I couldn’t sit still. I had a constant need to rise early. I lived to capture the day ahead. And already my mind was wandering away from bed to the shit I had to do today. Tasks to be dealt with, brothers to keep in check, things to get in order for the club… Good old ADHD did a number on not only my mental state but my ability to keep a woman in my bed for longer than a month—sometimes less than that.

There was nothing wrong with Willa or any of the women I bedded. But most were groupies. And groupies were predictable, always looking for a forever with a biker who wasn’t looking for more than a good time. Not that I blamed them. It was just that anything predictable didn’t hold my attention for long enough; didn’t challenge me, force me to focus, surprise me.

I love a good surprise.

I slid my jeans on, taking in Willa’s wild blonde hair. Like every other woman I’ve been with in the past, she’d been trying her best to kiss me, and looked a damn mess because of it. No matter. Pretty little thing like her knew the rules like all the rest of them did: I, Archer Benedict, never kissed a woman. On the mouth, anyways.

“One of the boys will give you a ride home,” I told her, nodding as I picked up my gun and tucked it into the waistband of my jeans.

Her lower lip pushed out into a pout. “Will I at least see you tonight for Flick’s welcome home party?”

“I’ll be around.” I winked then snatched up my wallet before heading out.

With Niyol ‘Hawk’ Lattimore’s house my main goal this morning, I let the door click shut behind me. It was Wednesday, which was also my favorite day of the week because anything with a nickname that started with “hump” was definitely worthy of being my preference. I walked down the hall, turned left, then stiffened at the sight of Talker, one of my club brothers, who was passed out on the floor in front of the couch that sat in the main lobby.

“Would you look at that.” I chuckled under my breath and headed over to him, hovering. Had I ever been this stupid at nineteen? Yeah. I was that stupid now.

The guy was dressed in a pair of skimpy white briefs and nothing more—unless you counted the bright-red nail marks down his back. Least he got lucky.

I nudged him in the ribs with the side of my boot. “Wake up.”

He groaned, rolled over onto his side. “Ten more minutes, Mom.”

I smirked and decided to leave him there. Dumb kid.

The rest of the bar area was empty this morning, other than a cleaning lady.

“Morning.” I nodded at the dark-haired older woman, armed with a vacuum cleaner.

She smiled tightly at me but didn’t speak or make eye contact either. I was pretty sure she was scared of us all, which was why she only came in during the early hours.

The gravel lot was half filled today. A few guys lingered to the left of our body shop—prospects mostly, probably out taking a smoke break. They watched me, but I didn’t acknowledge a single one of them as I stepped toward my bike.

As the VP of the Red Dragons, I should’ve taken the time to get to know the new guys more. But I also knew making nice would make them feel welcome… and feeling welcome would make them weak.

We were at war. There had been no deaths since February, for four months now, but we knew our enemies were out there, ready to pounce at any given second, and we needed to remain at DEFCON 4. Soldiers at the ready.

My brothers weren’t stupid. Nor were they lazy. But they’d grown weak lately, weren’t on guard as much as they should be either, mostly because of the women in their lives. That shit worried me too. Being blinded by the forever kind of pussy? Seemed pointless, honestly. Why have the same meal every night of the week when we had a never-ending buffet readily available right here? A delicious buffet of blondes and brunettes that managed to keep my ass happily sated, thank you very much.

For now, though, we’d agreed that the safest course of action was to do nothing about the war, and it was driving me fucking insane. More than anyone, I wanted to find our enemy, Pops, our former pres, and end this all before shit got even worse—before anyone else had to die.

I stepped up to my bike and studied her angles, bottom lip tugged between my teeth. All curvy, slippery, silver pipes, and a repurposed leather seat that fit me perfectly. I loved my bike almost as much as I loved sinking inside a woman for the first time. She was pretty—not to mention all mine—and I treated her like the queen she was, fixing her up on my own. I’d used old parts and combined them with new. I would’ve killed to run a shop of my own one day. But time was money in my world, and I barely had either of those things at the moment, which was why it was nothing but a dream.

As I straddled her seat, I couldn’t help but stroke her handlebars. Smooth yet rough, my paint job good, but not the best. I revved the engine just once to give her time to warm up before I started toward Hawk’s place at the back of the compound.