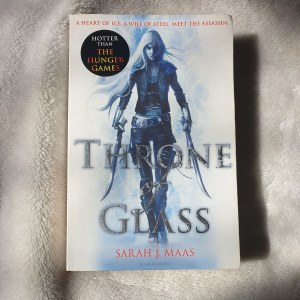 Blurb; After serving out a year of hard labor in the salt mines of Endovier for her crimes, 18-year-old assassin Celaena Sardothien is dragged before the Crown Prince. Prince Dorian offers her her freedom on one condition: she must act as his champion in a competition to find a new royal assassin.

Her opponents are men-thieves and assassins and warriors from across the empire, each sponsored by a member of the king’s council. If she beats her opponents in a series of eliminations, she’ll serve the kingdom for four years and then be granted her freedom. Celaena finds her training sessions with the captain of the guard, Westfall, challenging and exhilarating. But she’s bored stiff by court life. Things get a little more interesting when the prince starts to show interest in her … but it’s the gruff Captain Westfall who seems to understand her best.

Then one of the other contestants turns up dead … quickly followed by another. Can Celaena figure out who the killer is before she becomes a victim? As the young assassin investigates, her search leads her to discover a greater destiny than she could possibly have imagined.

My Review; I have been meaning to read this series since forever and I finally read the first book and loved it! I already cannot wait to continue with this series and see what lies ahead. I’ve always been interested in Assassins so this was perfect! There is a lot going on within this book and I want to say a little bit of a romantic story too in parts.

Celaena is one strong, determined and a clever young woman. She has to win her freedom back through a tournament against others and she will not let anyone stop her from winning. She wants that freedom. Parts towards the end are tense and edgy making me want to scream at Celaena especially in the final duel against a cheat and bully named Cain.

The romantic parts are cute showing she may be an assassin but she still has a heart and shes still a human. We learn about her past which is heartbreaking. Noone knows Celaena is an assassin she is under cover but soon people discover who she really is and she discovers friendships that she never thought she would have.

I just loved it all. It was nice to be in her world and not mine. It was brilliant. Highly recommend. A well deserved four stars from me. Made me forget about everything going on and just be there with Celaena. I can tell im in for a treat with this series.