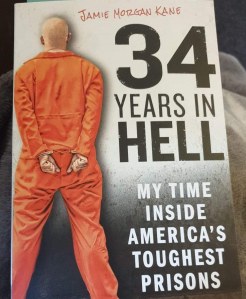 Blurb; In July 1983 James Morgan Kane returned home in the evening to find a corpse in his living room. Fearing that he would be blamed and sensing that his wife was somehow involved, he wanted to do all to protect his young family. Jamie worked through the night to dispose of the body all the while disbelieving the situation he found himself in. His luck ran out days later as he was arrested and sentenced to 13 years in prison. Jamie entered the U.S. prison system and was to stay there for 34 years with stints in San Quentin, Folsom State Prison and the notorious Deuel Vocational Institution (DVI) in California. He would rub shoulders with some of the world’s most infamous serial killers such as Charles Manson, Edmund Kemper, Charles Tex Watson and Herbie Mullin as well as gangs such as the Aryan Brotherhood and Mexican cartels. This book tells of his time: locked up with no hope of release, living the brutality of the unforgiving penitentiary system and finding his new purpose in life, as well as tales of his many run-ins with some of the world’s most dangerous inmates.

My Review; This is a non-fiction, real life story. It starts off more a biography of his life before the arrest and prison. He hasn’t had an easy childhood at all. Then we move on to the arrest and prison side to the story. If you’ve been following my blog a while you will know prison interests me so I love to read them and the stories within them. They’re intriguing to me.

Throughout reading this I really felt sorry for Jamie. What a brave, strong and determined man. He was moved between so many prisons in the 34 years and denied bail so many times, but he never gave up and I applaud him for that. He experienced many fights and battles along the way. It all paid off in the end. The ending we all wanted and needed. A story to tell. He hasnt let it effect his freedom now, instead after his release in 2018 he decided to share his story with us all.

I think America has a huge problem with their prison system that needs to be looked into further. An eye-opening, real read! Well deserverd four stars from me. Highly recommend. What a man. What a story.

One thought on “34 Years in Hell: My Time Inside America’s Toughest Prisons – Jamie Morgan Kane ★★★★”