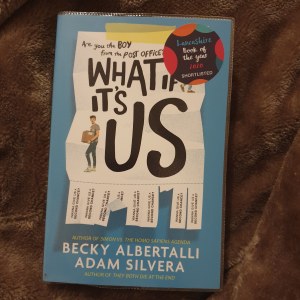 Blurb; Arthur is only in New York for the summer, but if Broadway has taught him anything, it’s that the universe can deliver a showstopping romance when you least expect it.

Ben thinks the universe needs to mind its business. If the universe had his back, he wouldn’t be on his way to the post office carrying a box of his ex-boyfriend’s things.

But when Arthur and Ben meet-cute at the post office, what exactly does the universe have in store for them?

Maybe nothing. After all, they get separated.

Maybe everything. After all, they get reunited.

What if Arthur tries too hard to make it work . . . and Ben doesn’t try hard enough?

What if life really isn’t like a Broadway play?

But what if it is?

My Review; This was one off my library pile. Its a Young adult romance between two boys Arthur and Ben. It’s such a cute read and story. Set in New York makes it even more romantic. The dates made this book for me and the treasure hunt! Super cute. I liked all the characters and it was an easy read for me. Short chapters and I didn’t want to put it down I needed to know what was going to happen between them both. A perfect ending tops this book for me.

It was recently nominated for an award too! Its brilliantly co-written between the two authors (both new to me). I would recommend. A cosy romance story to lose yourself into. A well deserved four stars from me. Highly recommend.