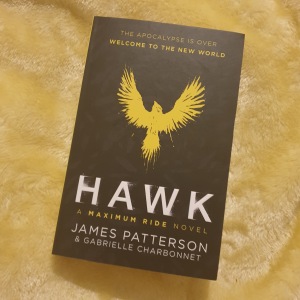 Blurb; A story for a new generation of Maximum Ride fans! 17-year-old Hawk is growing up hard and fast in post-apocalyptic New York City . . . until a perilous destiny forces her to take flight.

Where is Maximum Ride?

Ten years ago a girl with wings fought to save the world. But then she disappeared.

Now she’s just a fading legend, remembered only in stories.

Hawk doesn’t know her real name. She doesn’t know who her family was, or where they went. The only thing she remembers is that she was told to wait on a specific street corner, at a specific time, until her parents came back for her.

She stays under the radar to survive…until a destiny that’s perilously close to Maximum Ride’s forces her to take flight. Someone is coming for her.

But it’s not a rescue mission.

My Review; As many of you will already know I am a huge James Patterson fan. I came upon this book but soon realised it was actually book ten in a series d’oh. Nevertheless I still read it and then ordered the whole series. Win. Win.

It was such a brilliant read! YA, Fantasy. A world I enjoyed far more than my own at the moment. I loved the majority of the characters especially the angel family. The story focuses on a girl known as hawk she has wings and she is an amazing, determined, strong and powerful character. Along the way she comes under attack, has to save her friends and ends up saving their part of the way to finish off.

I loved the whole setting/world. A perfect YA read which I devoured in less than 24 hours. Highly recommend. I fell inlove with it. I’ve gone back to the start of the series and currently reading book one. A well deserved five stars. I can see this series going into my top reads of the year. Brilliant. How didn’t I know about the series sooner?