Blurb; When Art’s mother is accused of witchcraft, she is determined to get her back – at any cost. A lyrical adventure with folklore at its heart, for fans of THE HOUSE WITH CHICKEN LEGS.

Twelve-year-old Art lives in a small village in Scotland. Her mother has always made potions that cure the sick, but now the townspeople say she is a witch.

One cloudless night, Art’s mother is accused of Witchcraft, arrested, and taken from Scotland to England. Art mounts her horse, taking a sword, a tightrope, and a herbal recipe book, and begins a journey through wild forests to find her mother before summer solstice, using nature’s signs and symbols to guide her.

On her journey, Art will discover what sacrifices she will need to make to be reunited with her mother – and to alter the fate of women everywhere. But will she reach her, before it’s too late?

My Review; I got this through the Amazon Vine reviewers programme and I was instantly drawn to the gorgeous cover. This is a YA/older children’s book but I read all sorts there isn’t an age limit to reading anything. I absolutely loved all of this story. I devoured it in hours. Its easy reading for an adult, set out beautifully with some gorgeous illustrations throughout. It’s all about witches, the hunt for them and the drowning/hanging of them in England, Essex.

Main character Art’s mother has been taken and presumed a witch! Art is on a journey to save her mother before it’s too late but she cannot do it alone. Such a beautiful and powerful story. Art is strong, determined and very brave to go against that many people. Will she be able to save her mother in time? Loved it all! Highly recommend. A well deserved four stars.

Blurb; Seasoned pro golfer Travis McKinley is cruising toward a new season when he misses a putt on the 18th green. Just like that, he’s down and out and off the Senior Tour, his career all but dead.

Then Travis is visited by a mysterious stranger whose vision is clear. Go back to the beginning. The very beginning.

Taking his advice both literally and to heart, Travis and his family travel to their ancestral home – Scotland. In the place where golf was born, he’s able to look beyond getting the round ball in the round hole. And when Travis steps onto the Old Course at St. Andrews, the magic of the game takes over . . .

My Review; James Patterson is one of my favourite authors. I just love his writing style and how easy they are to read. This is a shortish read at just under 200 pages but a different read for me. This story is all about golf and golf tournaments not my usual choice. However, I did learn a lot about golf from it and it did have a great story line to it.

This is book three in the Travis McKinley series so I came into this series very late. However, it read perfectly fine as a standalone. I would love to go back to the other books if I find time. The story includes the famous Tiger Woods! It has a hidden message within to never give up, try again and keep going. It has an uplifting feel to it! The main character is a very determined man and alongside all the other characters I felt proud.

A well deserved four stars from me highly recommend. I’m surprised at how much I enjoyed it to say I know nothing about golf and it isn’t one of my interests. 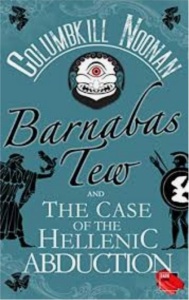 Zeus is used to getting what he wants…but that was before he met Barnabas Tew!

Barnabas and Wilfred, the unluckiest detectives ever, are enjoying their time in India, working on mastering their emotions and learning how to do all sorts of interesting yoga poses. They feel as if they’ve finally found some peace in their lives.

Everything changes, though, when Zeus whisks them away from their idyllic retreat and demands that they solve a case for him.

Having no choice, they reluctantly accept the job, but quickly come to realize that nothing is as it should be. Zeus’ motives are suspect from the beginning, the rest of the Greek gods and goddesses are untrustworthy at best, and Barnabas soon finds his temper hasn’t improved at all during his time in India.

Who is the mysterious lady who keeps popping up just when they need her? Is she friend, or is she foe?

Will Barnabas and Wilfred figure out what’s right and what’s wrong in this topsy-turvy world of lies, intrigue, and trickery? Or will the Greek gods and goddesses prove too much for them?

My Review; I came into this series very late so I had no background of the characters or what had happened before this, read well as a standalone but I think the previous books makes a huge difference and perspective. I would love to go back and read the previous books if I have time.

Barnabas Tew and the case of the Hellenic Abduction is book five in the series I believe. The two main characters Barnabas and Wilfred are both detectives and are the perfect, funny duo act. It’s a story full of adventure, the unexpected and a little bit of comedy I would say between the two detectives, they’re lovable. Can never be bored while reading this story. It set my imagination on fire. Brilliantly written.

Now I must admit this is something I wouldn’t have picked up for myself to read but I really did enjoy it. The story contains many gods and goddesses including Zeus, Aphrodite and Hades to name a few. A well deserved four stars from me and I would recommend! 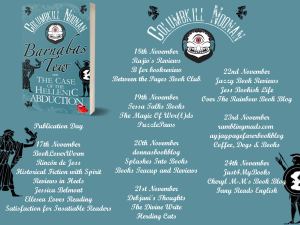