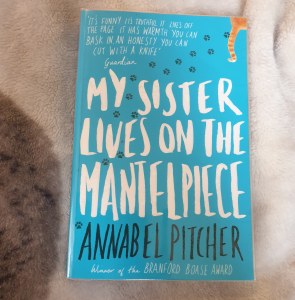 Blurb; Ten-year-old Jamie hasn’t cried since it happened. He knows he should have—Jasmine cried, Mum cried, Dad still cries. Roger didn’t, but then he is just a cat and didn’t know Rose that well, really.

Everyone kept saying it would get better with time, but that’s just one of those lies that grown-ups tell in awkward situations. Five years on, it’s worse than ever: Dad drinks, Mum’s gone and Jamie’s left with questions that he must answer for himself.

This is his story, an unflinchingly real yet heart-warming account of a young boy’s struggle to make sense of the loss that tore his family apart.

My Review; Tough one to review. The story is told through ten year old James’s eyes. He has twin sisters Jas and Rose. Unfortunately Rose was killed and this is what the book mainly focuses on. The split parents. The other children. The new school. The new house. New friends. The alcohol. The abandonment.

In parts it’s an emotional story but in others it offers hope and the good shines through with new friendships, secrets, the bond with his remaining sister and a grand finale that was beautiful. Also the cat was a great comfort to James. As his sister passed away when he was only five he doesn’t remember much about her and is made to feel bad about that.

We see how both parents react to the death of their child in different ways and the impact it has on the remaining siblings Jas and James. It also contains bullying with the message you can overcome it. It also contains racism which isn’t pleasant but we get to see both the good side and bad side of this too.

A brilliant eye opening book that says sometimes you just have to let go… A beautiful ending. A well deserved four stars from me. Highly recommend. An easy read at 232 pages.

Blurb; Seventeen-year-old Bianca Piper is cynical and loyal, and she doesn’t think she’s the prettiest of her friends by a long shot. She’s also way too smart to fall for the charms of man-slut and slimy school hottie Wesley Rush. In fact, Bianca hates him. And when he nicknames her “the Duff,” she throws her Coke in his face.

But things aren’t so great at home right now, and Bianca is desperate for a distraction. She ends up kissing Wesley. Worse, she likes it. Eager for escape, Bianca throws herself into a closeted enemies-with-benefits relationship with him.

Until it all goes horribly awry. It turns out Wesley isn’t such a bad listener, and his life is pretty screwed up, too. Suddenly Bianca realizes with absolute horror that she’s falling for the guy she thought she hated more than anyone.

My Review; Book one in the Hamilton High series. Main character… Bianca. The Duff (designated, ugly, fat friend). Or so she thinks… At the beginning of this book we see a quiet, shy and keeps to herself Bianca, but that is soon about to change as the unexpected happens. She falls for the last guy she ever expected to fall for. The guy who thinks he’s hot. The womanizer. The jerk.

Before she knows it she’s in. She claims he’s her distraction from life and ends up spending more time with him than her friends. Cue more drama… She finds herself in a love triangle with her actual crush thats she has dreamed of for years. Who will she chose? Can the womanizer Wesley ever change? Does she get a happily ever after with her crush?

The story also highlights the effects of divorce on these kids… Also looks into the issue of alcoholics. A brilliant read. An easy read. But good. Highly recommend. The perfect young adult, romance and chick-lit story. A well deserved four stars from me. 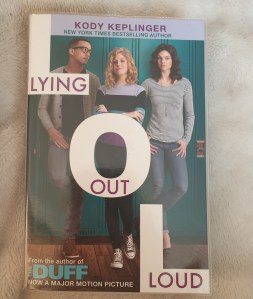 Blurb; Sonny Ardmore is an excellent liar. She lies about her dad being in prison. She lies about her mom kicking her out. And she lies about sneaking into her best friend’s house every night because she has nowhere else to go.
Amy Rush might be the only person Sonny shares everything with — secrets, clothes, even a nemesis named Ryder Cross.
Ryder’s the new kid at Hamilton High and everything Sonny and Amy can’t stand — a prep-school snob. But Ryder has a weakness: Amy. So when Ryder emails Amy asking her out, the friends see it as a prank opportunity not to be missed.
But without meaning to, Sonny ends up talking to Ryder all night online. And to her horror, she realizes that she might actually like him. Only there’s one small catch: he thinks he’s been talking to Amy. So Sonny comes up with an elaborate scheme to help Ryder realize that she’s the girl he’s really wanted all along. Can Sonny lie her way to the truth, or will all her lies end up costing her both Ryder and Amy?

My Review; I didn’t realise this was book four in the Hamilton High series but it was fine as a standalone. It’s the perfect young adult and chick-lit story. It was an easy read for me. But I really enjoyed it. Something different. Well written and short chapters.

The story focuses on two bestfriends Sonny and Amy. Amy is quiet and shy the gorgeous one according to Sonny. Sonny is a perfect liar and manipulater. It’s a tough one to review as theyre best friends and Amy would do anything for Sonny but what if Sonny goes too far?

Sonny lies about everything she’s so good at it she doesn’t know how to tell the truth. But she soon develops a crush on someone who prefers Amy. Personally I think Amy deserved a better friend than Sonny but they stuck together. Personally Sonny annoyed me in some parts, surprised me in others and at times she was very selfish.

With a happish ending and lies told by Sonny being uncovered. I enjoyed it. Getting lost into that teenage drama, high school world for a change.

A well deserved four stars from me. Highly recommend. I have just started the first book in this series The Duff.