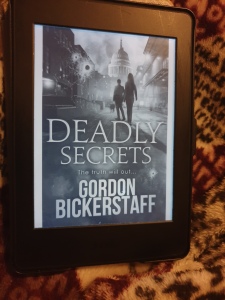 Book blurb; The truth will out…

Gavin’s life will be turned upside down when he joins a company to work on a product that will revolutionise the food industry. His initial gut instinct is to walk away until he discovers one of the company directors is the former love of his teenage life.

The financial implications are global and incredible. Powerful individuals and countries are prepared to kill as they compete to seize control of the company. Corruption at high levels, a deadly flaw in the product, and the stakes jump higher and higher.

Against overwhelming odds, Gavin must rescue his former love from the hands of an evil cult as they prepare her for a living nightmare.

The boat had disgorged all of its tourists, except for Mascarri. He sat stiff and erect, staring at the back of the boat and leaning against the seat window.
The Captain found no signs of life and assumed the poor man had suffered a stroke or heart attack. His face, cooled by a crisp wind on the canals, had turned pale as snow and his lips a deep purple.
The silver cup the woman handed to Mascarri contained fifty milligrams of enhanced neurotoxin from the blue-ringed octopus.
The toxin had spread rapidly in his blood, blocking nerve transmissions and had progressively shut down his organs. Groups of muscles locked in place when his neuromuscular nerves froze.
A blue-ringed octopus isn’t much bigger than a golf ball. It isn’t designed for fast pursuit. It can’t go swimming after its prey so its toxin is fast-acting. One octopus carries sufficient venom to kill twenty adult humans in a few minutes. Or one man in a matter of seconds.
*
When sensations of pins and needles surged down his legs, Mascarri didn’t suspect anything. In fact, with cool air blowing through the boat, he didn’t notice the onset of paralysis.
When he realised that he couldn’t move his arms, he also discovered he couldn’t move any muscles in his face. He felt rage when the woman glanced at her watch, reached over and jabbed a sharp pencil into the back of his hand.
She had peered into his eyes, winked, and smirked at him. His brain and eyesight remained functional when she retrieved her envelope from his jacket pocket.
He watched her transfer the contents of his briefcase to her bag and saw her place bottles of an orange liquid and a handful of wraps in his briefcase.
Then, she wedged his briefcase between his waist and the edge of the table to prevent his body slipping to one side.
The hustle of tourists jostling for position to take snaps of the Skinny Bridge had given her a perfect distraction for her activities.
When he realised he’d been drugged, he wondered how long it would take for the drug to wear off. He thought of excuses he would have to make to police and paramedics when the boat reached its berth. Each time he blinked, his eyesight deteriorated further.
Despair followed when his vision became speckled, like looking through black metal mesh. Seconds later, a myriad of fragile stars in a night sky extinguished in waves of blue-white death flashes as the rod cells in his eyes progressively stopped working.
In darkness, he pleaded for his life. Many times, he confessed and apologised profusely. He pledged his money, his time for church work and his love.
He promised no more thieving, no more prostitutes and no more beatings for his wife, Theresa. The same guilt-driven pleadings for forgiveness he’d made many times before.
He promised to return the money stolen from Alzheimer patients he’d targeted, even though he knew most of them had since died penniless.
He pledged to help the family of a client who committed suicide when his business failed because Mascarri had stolen too much from the accounts. He begged and begged for another chance to make things right.
Mascarri’s final seconds were dark and silent while paralysis swept relentlessly through his body. In the black void, he waited anxiously for the forgiveness he believed would come, and for the white lights to guide him into heaven.
The woman had sentenced him to forty seconds and now his time was up. The toxin had reached the pacemaker deep in his heart muscle. His heart stopped beating and Theresa became a widow.
*
The woman walked confidently through Dam Square with a spring in her step. Mascarri would still be alive if he’d been more careful with his words. He would have received the bonus he craved, not with her but with a prostitute.
He made one fatal error. A stupid threat, which she took seriously. She believed he would double-sell the SeaPro report, and she couldn’t allow him to do that.
The SeaPro report, which Mascarri should have handed to Jim Patersun was now in the hands of Gyge’s Ring. Ruthless people, desperate to take control of SeaPro’s new process, no matter the cost. Mascarri’s greed put an end to his life and now everyone associated with SeaPro faced imminent danger.
While she waited at a taxi rank, her head and shoulders filled the viewfinder of a long-range camera as it clicked through a dozen frames.
The photographer tugged his baseball cap, and allowed his camera to hang on his neck while he spoke into his mobile phone. He watched the woman’s taxi drive away and reported what he’d seen to his Ring Leader.
*
The Dutch police had little to work with. They believed his clothes were British but couldn’t decide if he resided in Amsterdam or not. His fingerprints weren’t on record.
In his briefcase, they found six one-gram wraps of amnesia haze (strong cannabis), and two bottles of orange-coloured krokodil.
The scene had all the hallmarks of a drug deal gone bad. The police concluded he’d been poisoned by krokodil, which is a concoction designed to convert codeine pills into desomorphine.
On the street, crude conversion of codeine is done in the bottle with a cocktail containing petrol, iodine, hydrochloric acid, phosphorus and paint thinner.